State of the Union: Obama still got it 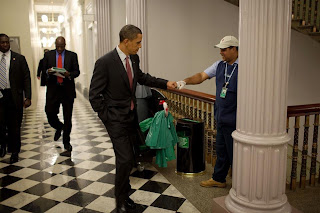 If America votes out Barack Obama in favo(u)r of hedge fund multi-millionaire Mitt Romney it will be a real tragedy. In his first term, Obama was dealt a rough hand (world economy in meltdown etc etc) but he remains the sharpest, slickest politician of his generation. Here's some choice quotes from his State of the Union address to Congress.

On Fairness: “We can either settle for a country where a shrinking number of people do really well, while a growing number of Americans barely get by”, said Obama, “or we can restore an economy where everyone gets a fair shot, everyone does their fair share, and everyone plays by the same set of rules.”

On inequality: “Millions of Americans who work hard and play by the rules every day deserve a government and a financial system that do the same. It’s time to apply the same rules from top to bottom: no bailouts, no handouts, and no cop-outs. An America built to last insists on responsibility from everybody.”

On common sense. “Now, you can call this class warfare all you want”, said Obama in reference to his proposals that anyone earning $1 million or more a year should pay at least 30 percent of their income in taxes. “But asking a billionaire to pay at least as much as his secretary in taxes? Most Americans would call that common sense.”

On partisan politics: “The greatest blow to confidence in our economy last year didn’t come from events beyond our control“, he said. “It came from a debate in Washington over whether the United States would pay its bills or not. Who benefited from that fiasco?”

Via someone named 'Periscope Writer' at some site called The Periscope Post
at 18:17

Archie
Work in Shoreditch, live in Shepherd's Bush. This is my personal blog. Find me on Twitter at @Archie_Thomas